Essay on the history of GIH

From GCI to GIH – some important points in GIH's history written by Professor Jan Lindroth in 2006.

The Swedish School of Sport and Health Sciences, GIH, is maybe the world's oldest educational establishment in the field of sport (physical exercise, physical education). 1813 is a respectable starting year, even compared to other Swedish universities in other disciplines. That was the year the educational institution Gymnastiska Centralinstitutet (Royal Gymnastics Central Institute) – GCI – was established, and GIH is a direct continuation of this. GCI was renamed GIH in 1966, changed its name to Idrottshögskolan (Stockholm University Colleage of Physical Education adn Sports) in 1992, before changing back to GIH in 2005.

GCI's origins should be seen in the context of social relations in the early 1800s. The Napoleonic Wars were reshaping the European map, which also affected Sweden. In 1809, Finland and the eastern provinces were ceded to Russia. Five years later, the Swedish-Norwegian union was created. Within the Swedish government chaotic conditions prevailed. There was a manifest interest in building a stronger military defence and broader civic education. In such situations, interest in physical exercise as a means to improve the population's physical condition increases.

GCI's creation is also associated with one specific person: Pehr Henrik Ling (1776–1839). After a troubled upbringing and rather unfocused education he spent several years in Copenhagen. There he had the opportunity to take part in the continent's fencing traditions and newly awakened interest in gymnastics.

In 1804 he was hired as a fencing master at Lund University but also taught gymnastics and sport. Strengthened by this experience, he went to Stockholm in 1813 with two assignments. Firstly as a teacher at the Military Academy Karlberg. Secondly, and more importantly, as director of the new educational institution for gymnastics, GCI, which he himself proposed and had outlined the basic plans for.

From the beginning, GCI and Ling came to form a strong and unavoidable combination. It is related to two factors: on the one hand Ling's distinct personality and vast areas of interest, on the other, the original gymnastics which he gave birth to.

On a personal level, he was driven by an interest in ancient Nordic culture and the Viking age's northern manhood which he wanted to recreate. In poetry and prose, he developed this theme as a model for the 'effeminate' generation of his time. This literary interest led to a place in the Swedish Academy. At the same time, he became increasingly interested in medical science, which brought him into the Swedish Society of Medicine.

The original form of gymnastics "Swedish gymnastics" (or "Ling gymnastics") is characterised by it comprehensiveness. It includes all four of the main areas that were already represented in ancient Greece: aesthetic, medical, military and educational gymnastics.

In particular, the prominent role of physiotherapy accentuated the character of Swedish gymnastics and GCI. This helps to explain the development of the strong foundation of Swedish gymnastics in medical science, as well as the exercise's form of simple, constructed movements, systematically executed one after the other.

Swedish gymnastics began being exported in the 1830s. The dissemination across the world grew increasingly and culminated in the decades around the turn of 1900. The dissemination took different forms: foreign visits and course participation at GCI became very frequent, Swedes with the GCI exam settled in other countries, people read professional literature and correspondence. 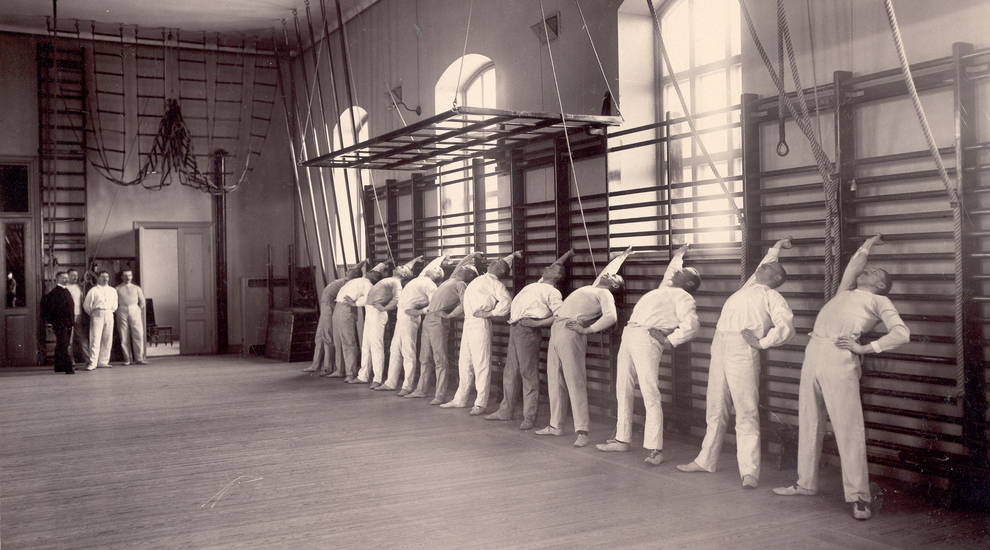 For a long time GCI was weakly regulated with regard to statutes and regulations. In 1864 the first detailed statutes were established. A governing board was established.

According to new statutes in 1887, teaching was expanded to a maximum of three years (from the previous two). Those who completed all courses were awarded the title of Gymnastikdirektör (gymnastics director), a title which was abolished in 1977.

Physiotherapy gave GCI economic benefits and scientific legitimacy, but was the cause of major problems the same time. GCI's original mission was to provide the country with civilian and military gymnastics teachers. Physiotherapy gradually 'slipped in'. It gained a firm foothold with the 1864 statutes, after considerable doubt during the investigation phase. But after 1900 the expanding medical profession began to point to weaknesses in GCI's physiotherapy activities, including the lack of private research and clinical resources.

After a long period of agonising struggles, physiotherapy was mostly withdrawn from GCI and entrusted to the medical sector (Karolinska Institute and the Seraphim Hospital). This separation, which was deeply disliked by Ling's followers and GCI-trained gymnastics directors, was established in a new statute which was valid from 1934 until 1959.

The important threshold year of 1934 also meant that military gymnastics were transferred to the military sectors (the Swedish Army Physical Training School).

The original four elements of Swedish gymnastics at GCI had been reduced to one. GCI became an establishment of what was originally called educational gymnastics, but now sooner perceived as a branch of sport, which was greatly expanding at the time. GCI's future was in sport (see more below).

What was the situation with teachers and students at GCI? To begin with the headmasters were civilly initiated in the form of Pehr Henrik Ling and physiotherapy focused Lars Gabriel Branting (1839–1862, father of the labour movement's prominent figure Hjalmar Branting).

Subsequently a period of over 80 years with military officers at the helm followed. It began with Gustaf Nyblaeus (1862–1887), a liberal man with an interest in the burgeoning competitive sports. It continued with the powerful Lars Mauritz Törngren (1887–1907), who strongly concentrated on the greatness of traditional Swedish gymnastics.

The line of officers was broken only by the Danish physiologist Erik Hohwü-Christensen (1946–1956), followed by Paul Högberg (1956–1977). Stina Ljunggren (1977–1989) and Gustav Hansson (1989–1992) served as department heads when GIH was under the Högskolan för lärarutbildning (Teacher training college) as an institution. When the sports college finally became an 'independent' university college again, Arne Ljungqvist was appointed rector (1992–1996). He was succeeded by Ingemar Wedman (1996–2002) who was succeeded by Per Nilsson (2002–2004). Mats Eriksson was appointed in 2005 and was succeeded by Karin Henriksson-Larsén in 2009 and Per Nilsson in 2018.

Even the teachers had a strong military component until the reorganisation in 1934. Both military and educational gymnastics were led mainly by officers. But there were two other elements to counterbalance this: first, the female teachers, and the teachers who were responsible for physiotherapy and its statutory who were licensed doctors.

In terms of students the military was also dominant. The standard student on GCI's one-year instructor courses was a young officer on deputation. Several of these then prolonged their training and became qualified physical education teachers in grammar schools. Only a few medical students completed their training at GCI.

From the 1860s female students began being accepted, a category that was increasingly gaining importance and demanded reformed educational content.

From 1934 there was a 'civilisation' of the male student population, which has long since applied.

One of the characteristics of GCI-GIH has always been great scientific ambitions. This was particularly reflected in Swedish gymnastics. But there were long-term problems. The scientific excellence of the teaching profession was fragile for a long time and did not offer a sufficient answer to the high scientific confidence. Independent basic research was conducted infrequently or never and was not part of the institute's mission. When the external representatives of medical science began to attack the GCI and Swedish gymnastics in the early 1900s, GCI had difficulty defending themselves. Ling traditionalists, their own experiences and belief in forefather Ling's intuitive genius were pitted against the results of modern physiological experiments.

To strengthen GCI's scientific position a couple of government investigations in 1912 and 1918 suggested an astonishing grand renovation. They wanted to move closer to the academic world with at least six professors with research assignments, assistants, teaching assistants and training to Master's level. However the end result after many years of further investigations were modest: a single professorship in exercise physiology and health. This was established in 1939 and in 1941 Hohwü-Christensen was the first holder.

Ling had forcefully stated the importance of gymnastics based on the principles of physiology and anatomy. No less than one hundred years after his death, the leading state educational institution in the area received resources to scientifically implement this constructive objective.

GCI's first full-time scientists worthy of the name had their roots in the world famous Danish research in physiology established in the early 1900s, with big names like August Krogh and Johannes Lindhard. Since Hohwü-Christensen, this line has been successfully passed on under the leadership of Per-Olof Åstrand, Bengt Saltin, Björn Ekblom and many others.

For a long time physiology and biomechanics were the only scientific areas with significant resources and importance at GCI-GIH. Some activities existed within the discipline of education and psychology, mainly represented by Olle Halldén. It was first in the mid-1980s that the behavioural sciences gained a firm footing through a professorship in sports education with Lars-Magnus Engström as the holder.

The subjects sport, physiology, biomechanics and sports education had been in individual classes. In a quest for expansion, however, humanities became established at GIH in the 1990s through history, mainly in the form of a lectureship secured by Leif Yttergren (1999). In addition, disciplines such as public health, psychology, ethnology and law have received some attention. The subject public health has been established as a specific subject at GIH for a time. Meanwhile, scientific contacts with neighbouring universities in the capital (Karolinska institutet, Lärarhögskolan and Stockholms universitet) have been perpetuated by network agreements and concrete cooperation.

The educational content has shifted considerably over the last two hundred years since its beginning in 1813. To begin with artists came to GCI, fencing was a weighty element and educational gymnastics was also practiced alone or with equipment ("machineri"). Physiotherapy also became more and more important, something that would probably not have an equivalent in any other gymnastic university.

Educational gymnastics was systematised in the 1860s by Pehr Henrik Ling's son Hjalmar, who was a GCI teacher and the unknown author of Swedish school gymnastics. His highly regulated lessons, 'the Swedish gymnastics system', was taught in many parts of the civilized world well into the post-war period.

As we have already seen, fencing and physical therapy disappeared from GIH from the middle of the 1930s. Instead, sport began to take up more and more space. During the second half of the 1900s sport got the upper hand, though gymnastics continued to hold a strong position. How this happened is not studied in detail. The shift in emphasis should be seen in the context of the sports movement's triumphal march through the 1900s.

The dominance of competitive sport within the post-war physical training culture also had an impact on GIH, though not immediately.

To a large extent the sport movement's activities (branches) and forms of activity were taken over by GIH, and from there moved into schools. In particular, some popular team ball games with football in the lead enjoy a strong position. In addition, through special training for coaches and other means GIH and the sports movement led by the Swedish Sports Confederation (RF) have developed an increasing closeness.

The development from gymnastics to sports does not reflect the whole story. For example, dance and other artistic elements of gymnastics from the interwar period have supplemented the military oriented gymnastics system. Here, women have been at the forefront.

Throughout the 1900s, GIH also engaged in teaching related to outdoor activities. Mountain trips have been one of the highlights. The most important change in education is probably still on another level: in recent decades growing emphasis has been placed on theory and the link between practice and theory.

Greatest attention is given to practical physical education along with the more theoretical subjects public health, pedagogy, physiology and movement science. However, as previously mentioned, a number of other theoretical subjects also have their place on the timetable, such as history, psychology and law/economics.